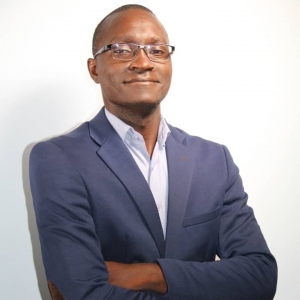 Joshua Ndong’a Kamelu was born on 28th March, 1991.  He did his secondary education at David Kaunda National Technical High School and then later earned a Bachelor of Economics from the University of Zambia. He then earned his Masters in Economics at the Copperbelt University. Currently he is studying for a Diploma in Educational Leadership.

Prior to joining KF as Programs Manager, Joshua worked as an Economist at the Competition and Consumer Protection Commission in the Ministry of Commerce. He then joined an Entrepreneurial Institute as Head of Research and Academic Affairs while lecturing part–time at Chreso University.  On the side Joshua has been running a small Human Capital Development organisation called Strategic Initiative for Excellence (SIX) since 2016.  Primarily, SIX is concerned with Career Guidance, Personal Development, Leadership and Entrepreneurship for high scholars, students and young professionals.

At KF, Joshua oversees the running of programs such as recruitment of new students into KF, community service, assigning students to mentors, capacity building, working with gap year students and alumni on various projects.  He is also responsible for the production of program reports and the monitoring as well as evaluation of progress on KF projects.

Joshua was recently co–opted into the Communications Department of the HALI Network.  The HALI Access Network is an international association of non-profit organizations in Africa that work with high-achieving, low-income (HALI) students to access international higher education opportunities.  The role entails general internal and external communication for the network, developing and enforcing publicity strategies for the organisation and developing information, education and communication materials for the organisation among other things.

For fun Joshua loves to play and watch soccer.  He plays as a striker, loves to score goals and win games for his team.  He is passionate about mentoring young people and as such this occupies the majority of his free time.  He is an avid reader, a competent public speaker and loves to help other people.

The opportunity to work with KF is a great one and its mandate ties in very well with some of the things that Joshua is passionate about.  Zig Ziglar said “you have never really lived until you’ve done something for someone who can never repay you.”  That is the mantra by which Joshua lives.